Buena Vista planning and development officials are proposing an overhaul of sign regulations that they say would make it easier and cheaper for new and existing businesses.

“It’s part of the larger picture of us trying to work with businesses more and be a little more friendly to businesses that might come into the downtown,” said Tom Roberts, director of Planning and Community Development in the city.

The proposal would create a new group of signs that would not require business owners to pay for and obtain permits from the city.

The exempt group includes signs that are limited to 25% of a business’s window. Temporary signs with an aggregate size of 12 square feet also would not require permits.

And businesses could display up to two signs no larger than 2 feet X 2 feet or 1 foot X 4 feet—and they cannot be illuminated. Such signs would include messages with political or religious meaning.

Buena Vista has been trying for years to attract and retain businesses in its downtown area. The new regulations would save businesses $30 per permit for the exempt signs. 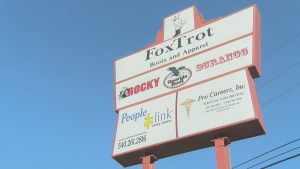 A public hearing will be held in March. Roberts said he expects the new code to be adopted by city council in April.

“If you wanna change your town, you gotta change your rules,” said Jason Burke, who owns Mountain Music and Café with his wife, Sandy.

Sandy Burke said regulations should be unique for each business and each sign. “As a city, we need to be inviting,” she said.

“What I would like to see for people [who are] green to the area … is an easy one-two-three step process to start a business in Buena Vista,” said Lew Hamilton, owner of JJ’s Meat Shak.

City officials decided to rewrite the sign regulations “because of the need for greater simplicity and better legal compliance,” according a preliminary report by the planning and community development staff.

In 2015, the U.S. Supreme Court signaled municipalities that they could not treat signs differently based on their content. The Court unanimously reaffirmed the importance of the First Amendment’s protection of content in signs.

But the planning and development staff report said there are limits to the kinds of signs that could be displayed. No sign can be more than 25 feet tall, which is an increase from the current limit of 18 feet, unless it is attached to a building.

The proposed regulations ban electronic message boards that flash more than once per minute. The reason is that they can be distracting or hazardous to drivers and pedestrians.


The Rockbridge County Schools Board has approved a

The Walker Program is a new Rockbridge County init

Residents of Rockbridge County who lost jobs due t

Is it a spy? Or a CIA agent? Maybe the COVID polic

A little behind the scenes action for ya- @wishupo