Compensation for members of the Rockbridge County Board of Supervisors will more than double next month—and bring their pay to more than triple that of citizens who serve on the city councils of Lexington and Buena Vista.

The current board of supervisors voted May 28 to increase the pay to $12,280, up from $5,500, according to county documents. The new amount starts on Jan. 1 – when two new supervisors will take office.

The last time their pay was changed was in the early 1990s, said Spencer Suter, the county administrator.

The supervisors’ $12,280 annual pay compares to $3,600 a year for members of Lexington’s City Council and $3,120 for those serving on the council in Buena Vista. And the disparity raises questions about how such elected officials should be compensated. 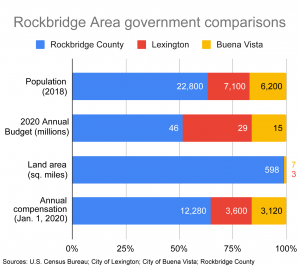 The board of supervisors and both city councils consist of elected officials who serve as the governing body of the respective jurisdictions. While the jobs are not intended to be full-time positions, members of the board and the councils’ schedules are busy, no matter the locality. The members of all three bodies attend twice-a-month meetings and work sessions in addition to meeting with their constituents.

“It’s probably the case that I’m doing something for the city every other day,” said Buena Vista City Councilman Steve Baldridge, who was not re-elected in November.  “I look at the compensation, and it doesn’t need to be much.”

Rockbridge County is the largest of the three jurisdictions in terms of land mass and population. The U.S. Census shows a county population of just under 22,800 in 2018; Lexington’s population was just over 7,100 and Buena Vista was about 6,200.

Rockbridge County is about 600 square miles, while Lexington is just 2.5 square miles and Buena Vista is 6.7.

“[There are] so many committee meetings and phone calls and emails from constituents,” said R. W. “Bob” Day, who was just re-elected to the Rockbridge County Board of Supervisors. “You get short notices on these meetings, but it comes with it.”

The positions are often filled by individuals who have flexible jobs or are retired from their primary job. Day retired as Sheriff in 2012 after 20 years in the position.

He said he had to work with the board multiple times as sheriff in budget and committee meetings.

“I had no idea that it was that much work to do this job,” he said. “I do not see how a person with a full-time job is able to do this board job.”

All three bodies’ salaries place the elected official under the federal poverty line, which is set at $12,490 for a household of one in 2019, according to the U.S. Department of Health & Human Services. But these roles are usually not the primary source of income for the elected individuals.

Lexington’s City Council has not seen a pay raise in over 14 years. In 2002, the members of the council voted to set the salary at $300 per month, or $3,600 a year, starting in 2005, an ordinance from the city council shows. The increase took effect in 2005 and has not changed since then.

The Lexington City Council is planning to discuss its salary next year, said Jani Hostetter, the clerk of the council.

It’s just a different situation and the structure is a little different,” Lexington City Council Member Michele Hentz said. “I could have never done it with children. It’s just something that [now] I don’t have much time for anything else.”

In Buena Vista, the city council is paid $260 a month, or $3,120 annually. Dawn Wheeler, the clerk of the city council, said the council does not have any plans to increase the position’s pay next year.

In the May 28 meeting, John Higgins and David Hinty, Jr. both said that higher pay could attract individuals from diverse backgrounds to seek office and “will level [the] playing field,” minutes from the meeting show. Neither sought re-election this year.

The only board member to vote against the increase in May was Daniel Lyons, who will still be on the board in the new year and receive the increase. He shared his concern for the financial impact on the county’s future budgets, county minutes show.


The Rockbridge County Schools Board has approved a

The Walker Program is a new Rockbridge County init

Residents of Rockbridge County who lost jobs due t

Is it a spy? Or a CIA agent? Maybe the COVID polic

A little behind the scenes action for ya- @wishupo