Samuel Eben Bouis, 22, a VMI senior from Yorktown, Va., was arrested on charges of burglary with intent to commit rape, aggravated sexual battery of an incapacitated victim and abduction on Oct. 7 by the VMI Police.

Boris Rodrigo Lopez, 22, a VMI junior from Manassas, Va., was arrested Sept. 15 by the Rockbridge County Sheriff’s Department on charges of burglary with intent to commit rape, aggravated sexual battery of an incapacitated victim and attempted rape by force or threat.

These cases bring to five the number of sexual assault incidents reported at VMI in 2019, according to weekly crime logs published on the school’s website under the Clery Act, a federal law that requires universities to disclose crime statistics.  They call attention to the issue of sexual assault on college campuses, which is prevalent both at private and public universities.

The arrests at VMI came just days before the release of a climate survey on sexual assault and sexual misconduct by the Association of American Universities. VMI was not one of the 33 colleges and universities surveyed in the report.

The survey found that one in four students reported that sexual assault and sexual misconduct were either “very” or “extremely” problematic at their school. And one in five female students reported experiencing non-consensual sexual contact since enrolling in college.

At VMI, it’s a unique situation because men make up 87 percent of the 1,685 cadets at VMI, a military college that began admitting women in 1997.

Most victims of sexual assault on college campuses don’t contact offices dedicated to providing aid, the AAU survey found. The most common reasons were a belief they could handle the situation themselves, that they did not consider the incidents serious enough, or that they felt embarrassed or ashamed.

“The results provide cause for both hope and continued concern,” AAU President Mary Sue Coleman said in a statement. “They reveal that while students know more about university-sponsored resources for victims of sexual assault and misconduct, they still aren’t using these resources often enough.”

VMI has a harassment and sexual misconduct policy called General Order 16. All cadets, faculty and staff are required to report violations of that policy to the Title IX office, said Boobar.

“Everybody here at VMI is what we call a ‘responsible reporter,’ so they must report if they believe there’s been a violation,” Boobar said. They’re required to report violations to Title IX resources, not to the VMI police.

Cadets can also report sexual assault to the Cadet Equity Association, or CEA, a group of student representatives. The CEA will report incidents up the chain of command to the Title IX office.

There are three confidential resources on campus– the cadet counseling center, the two chaplains, and the medical staff at the hospital, Boobar said.

“Anybody can go to any of those three resources and talk to them about anything they want to and it doesn’t have to be reported to me,” he said.

Every year, each class at VMI receives training about Title IX, General Order 16, and how to report, at least twice a year, he said. There is also a bystander intervention program.

“Everybody here at VMI is what we call a ‘responsible reporter,’ so they must report if they believe there’s been a violation” – Jeff Boobar

In 2014, VMI was one of more than 100 colleges and universities, including Washington and Lee, under investigation by the U.S. Department of Education’s Office of Civil Rights for possible violations of federal law related to their handling of sexual-violence complaints.

“Female cadets were exposed to a sexually hostile environment,” the OCR found. “VMI failed to provide for the prompt and equitable resolution of cadet complaints alleging sexual harassment and sexual assault, as required by Title IX.”

General Order 16 was rewritten after the OCR investigation, which has been resolved.

“Our General Order 16 has been vetted and approved by the OCR and Department of Education,” Boobar said.

The number of reported sexual assault crimes has remained fairly consistent at VMI over the past three years, according to data published under the Clery Act.

The number of incidents in the past three years are similar at nearby Washington and Lee University, whose OCR investigation has also been resolved.

At W&L, the number of sexual assault crimes reported has been higher than the number of cases heard by the board that handles disciplinary measures, the harassment and sexual misconduct board, according to the school’s website. 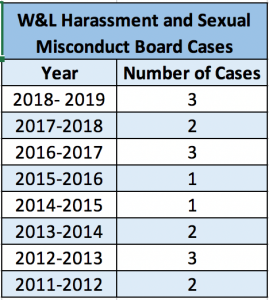 At VMI, five reports have been made for sexual assault, statutory rape and rape since the beginning of 2019, according to weekly campus crime logs published on VMI’s website.

Bouis and Rodrigo Lopez are not currently enrolled at VMI, according to the registrar’s office,

Both cases are scheduled for preliminary hearings Dec. 16 in Lexington-Rockbridge District Court.