The race for the 25th District seat in the Virginia State Senate is nearing the Nov. 5 finish line. The experienced incumbent Democrat is challenged by a self-proclaimed underdog Independent – and both believe they can win.

Creigh Deeds, 61, is a Democratic candidate from Nimrod Hall in Bath County. He has served as the 25th District senator for nearly 18 years. He was elected to the seat in 2001, after serving for 10 years in the Virginia House of Delegates. Deeds is also a lawyer in private practice.

His opponent is Elliott Harding, 29, an Independent candidate from Charlottesville in Albemarle County. Harding received his bachelor’s degree in political science and economics from the University of Virginia and his law degree from Washington and Lee University. He, too, is a lawyer in private practice.

Deeds said the outcome of the election depends on voter turnout.

“I think if the right people come out to vote, I will win. But if they don’t, I will not win, and that’s the bottom line,” he said in an interview. “Politics is simple. At the end of the day, you just have to get the most votes. Sometimes you eat the bear, sometimes the bear eats you.”

Harding said he is confident he can win the race.

“I think I can win, for sure. I mean, it’s a low turnout election. I’m obviously an underdog, but I have a much more populist ideal,” he said. “I have really done my best in my independent run to reach out to communities that might not vote at all or might historically even vote for my opponent but now have changed.”

The candidates share similar careers and campaign platforms. They stand on the same side of several issues, including environmental policies, economic opportunity and education. But their campaign strategies couldn’t be more different.

Harding has a Republican history and is endorsed by the Republican party. He was the Chair of the Albemarle County GOP Committee in 2016. He said he is running as an Independent because he agrees with opinions on both sides of the aisle.

“I think in this particular race, being an Independent is the way to go, because I find myself to the left and to the right of my opponent on some pretty key issues,” he said in an interview. “I think that being an Independent [in the Senate] would allow me to serve as a vehicle of bipartisanship.”

But Deeds thinks his opponent’s decision to run independently is simply a campaign strategy.

“He’s running as an Independent because he knows the people in Charlottesville and Albemarle County won’t vote for a Republican,” the senator said. “It’s all strategy. I don’t think it’s very honest, but it is what it is.”

Deeds said his strategy is simple. “My strategy is just be who I am,” he said. “I’ve got a record. And you can look it all up. The good, the bad and the ugly. It’s all there.”

The incumbent ran for attorney general in 2005 and governor in 2009, but he lost both races. He said the experience taught him a lot about Virginia’s assets.

“Not everything you do in life works out, and it was certainly disappointing to lose both times,” Deeds said. “But looking back on it, it was a great experience.”

Harding thinks Deeds no longer has what it takes to win the senate seat in the 25th District, 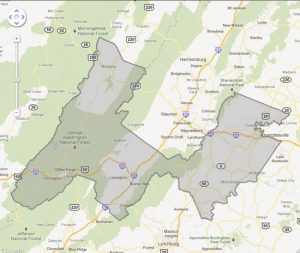 which includes Rockbridge, Alleghany, Nelson, Bath and Highland counties. It also includes Charlottesville and the majority of Albemarle County.

“Last time my opponent had a competitive race was in 2011,” Harding said. Deeds ran that year against Thomas Aldous Jr. “He won the four most western counties, which historically are red counties, but he won them.”

“I think that some of the folks-y, neighbor, this-is-where-I’m-from charm has worn off to the point where people in that area of the district are just tired of him,” Harding said, “and hopefully they’ll slip in my favor.”

But the incumbent said he still has plans for the district. “I’m not finished,” he said.

“You can’t conquer the world in one day. You can’t accomplish all that you want to accomplish the first go at it, but you have to keep at it, and it’s satisfying,” Deeds said. “I’m good at this work. I enjoy it. I’ve still got passion for it. I’ve been doing it for a long time, but the reality is, seniority is important.”

Accessibility to quality health care is a major issue on Deeds’ agenda.  “I’m proud that, just a year ago, we were able to get Medicaid expansion done,” Deeds said. “But we still have so much to do. We still have too many people that are uninsured.”

Mental health care is especially of interest to Deeds. The senator serves as chair for the Joint Subcommittee to Study Mental Health Services in the Twenty-First Century. His son, Austin Creigh “Gus” Deeds, died by suicide in 2013.

“My strategy is just to be who I am. I’ve got a record, and you can look it all up.” – Creigh Deeds

According to a Roanoke Times article, Senator Deeds settled a $6 million lawsuit a year ago against a former employee of a local mental health agency that he blamed for his son’s death.

“We’ve got to step up our game and make sure we get people or provide people with the access to mental health services they need, no matter what their income,” Deeds said.

Like Deeds, personal life experiences have guided Harding’s focus to one major issue. He is passionate about promoting criminal justice reform in the 25th District.

“I’ve been exposed to it a lot of different ways,” Harding said. His uncle has been a sheriff in Albemarle County for 12 years.

“It’s my No. 1 issue because what I’ve realized is everyone who’s touched by it loses a little bit of their voice as far as the system is concerned,” Harding said. “It’s a pretty taxing process on folks.”

“Having a young perspective on issues allows for newer ideas and more contemporary solutions to the problems that we’re facing.” – Elliot Harding

“I’ve also had family that went through the system. I’ve had family who was incarcerated very close to me. That process really opened my eyes to a lot of injustices that can take place and how most people fight that fight with two hands behind their back,” he said. “Once I’d seen it, you don’t unsee it.”

If Harding wins the seat, he will be one of the youngest members in the state senate. And he said that doesn’t scare him.

“I’m relatively confident that having a young perspective on issues allows for newer ideas and more contemporary solutions to the problems that we’re facing, other than the status quo or outdated policies,” he said.

Harding said the district needs organizational reform. He said large energy companies like Dominion Energy, Inc. have too much control over government decisions.

“I’ve made it a platform issue to go after Dominion’s monopolistic control of Virginia,” he said. “They’re the largest donor to both political parties, and I find it to be an outdated model for them to have the sole source of energy production in Virginia.”

He and Deeds agree that the construction of the Atlantic Coast Pipeline is a bad idea. The natural gas pipeline, if Dominion constructs it, will cut through Bath, Highland and Nelson counties.

“I am very much against that pipeline,” Harding said. “It’s not a domestic project. It’s not like it’s for a local power plant.”

“Forget about the fact that it’s in our backyard,” Deeds said. “Look at the projections for our need for gas. I’m convinced that this gas is being piped for export, away from this country’s shore. We don’t really need it.”

“I’m convinced that we’ve got to move towards renewable sources of energy as quickly as possible,” Deeds said. “My oldest daughter lives in Alaska. And anyone who doesn’t think that human behavior has affected climate change ought to go up there.”

The candidates are also on the same page when it comes to economic opportunity and quality education for the rising generation.

“I think that both locally, statewide and nationally we’ve overemphasized pointing people in the direction of the four-year liberal arts school,” he said.

Harding has proposed reintroducing trade skills, like welding, culinary arts and coding, back into K-12 schools and making them required for graduation.

To read more about the candidates’ backgrounds and campaign platforms, visit their websites, https://www.senatordeeds.com/ and  http://hardingforva.com.