Couples in Virginia are no longer required to list their race when they apply for a marriage license, the commonwealth’s attorney general said in a memo last week – and a Washington and Lee couple was the catalyst for that change.

Now, when couples apply for a marriage license, they can select a “declined to answer” box instead of disclosing their race. The Rockbridge Circuit Court clerk’s office will also allow couples to write in whatever race they identify as, instead of requiring them from a list of options.

These changes to marriage licenses were made after three couples who were denied marriage licenses in Rockbridge or Arlington County filed a federal lawsuit because they refused to label their race on the application. Next Friday, a federal judge will decide whether this is unconstitutional.

Brandyn Churchill and Sophie Rogers, one of the couples who filed the lawsuit on Sept. 5, said they were shocked by the list of races provided by the clerk’s office in Rockbridge County when they tried to apply for a marriage license for their Oct. 19 wedding. 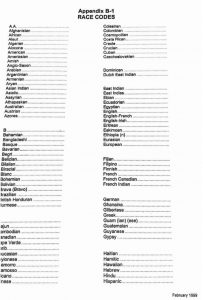 “We asked to see a list of the acceptable races and that’s when they gave us that horrendously long list with all of those terrible options, and it was just horrifying and shocking,” Rogers said in an interview. Rogers is a second-year student at the W&L School of Law. Churchill graduated from W&L in 2014 and is now a doctoral student at Vanderbilt University.

Couples in Rockbridge County will no longer receive this list of options when they apply for a marriage license.

When Rogers and Churchill asked if they could submit their application for a marriage license without identifying their race, employees at the clerk’s office tried to accommodate their request at first.

Michelle M. Trout, the Rockbridge Circuit Court clerk who was named a defendant in the lawsuit, did not return five phone calls asking for a comment.

Rogers and Churchill became involved in the lawsuit through a professor at the W&L School of Law, who knows the attorney representing all three couples, Victor Glasberg.

The other two couples who filed the lawsuit, Ashley Ramkishun and Samuel Sarfo and Amelia Spencer and Kendall Poole, were denied marriage licenses in Arlington County.

Arlington Circuit Court Clerk Paul Ferguson told the Associated Press that he “certainly understood why that question would make someone uncomfortable.” He said he would submit the application if a couple had chosen to leave the question blank. But state officials would be the ones to decide if the application could be accepted.

The Virginia Racial Integrity Act of 1924, which requires applicants to label their race on their marriage license, reflects “Virginia’s historical repression of non-white persons,” the lawsuit says.

“There’s no reason why this law should still be in effect in 2019,” Rogers said. “It’s a remnant of Jim Crow and it’s a disgrace that Virginia still maintains it.”

A statute that requires county clerks to deny a marriage license to couples who don’t disclose their race would “raise serious constitutional questions,” said the attorney general of Virginia, Mark Herring, in a memo on Sept. 13.

“Our end goal, personally, is to get married,” Rogers said. “Thankfully, we are able to get our license now without providing our race, but that is sort of a temporary Band-Aid to the issue.”

The three couples are moving forward with the lawsuit. Their attorney has requested a summary judgment and asked District Judge Rossie D. Alston, Jr. to declare the law that requires the disclosure of race on a marriage license as unconstitutional.

The judge can rule that the law is unconstitutional at the next hearing, which will take place at 10 a.m. Oct. 4 in federal court in Alexandria. Otherwise, the case will continue on through court proceedings, even though the application for a marriage license has been changed.

Rogers said she is surprised by the amount of national media attention the lawsuit has received, from news organizations like The New York Times, The Washington Post, NBC News and CNN.

“At first, when we got involved in this, I didn’t think it would blow up the way it did. But, I’ve been really pleasantly surprised with how positive and supportive everything that I’ve seen has been,” she said. “Across the board I’ve seen that people are on our side and are just as shocked and horrified by this law.”

Even if Virginia’s law changes, couples in seven other states are still required to disclose their race on their marriage application. Connecticut, Delaware, Kentucky, Louisiana, Minnesota, New Hampshire and Alabama have laws similar to Virginia’s.

“It would be fantastic if other states that are in this position follow suit,” Rogers said. “I think broadly it’s just good to continue the conversations that we’ve been having about racial discrimination and how to end that.”