Solar panels are helping students, teachers and administrators in Lylburn Downing Middle School visualize the impact they have on the environment.

Administrators said students like the daily reminder the panels give to stay conscious of the energy they use.

“It sends the right examples to our kids that we need to be stewards of our environment,” said Jason White, Lylburn Downing Middle School principal. “It impresses upon our students how important it is to take care of our environment.”

The company behind the project—Secure Futures, headquartered in Staunton—designs, finances and operates the solar panels for tax-exempt buildings, according to  company CEO Tony Smith. The firm installed the panels on Lylburn Downing’s roof in September 2016,  with the goal of completely offsetting the school’s electricity usage.

“Roof real estate is otherwise wasted space. It’s not being used for anything,” Smith said. “Rather than having the sun beating down on the roof membrane and wearing it out through ultraviolet rays, why not put that energy to work?”

Smith said that Secure Futures, which provides solar panels to buildings with large rooftops and the ability to harness solar power, is also interested in protecting schools’ pocketbooks.

“One of our expectations is that they not only are able to achieve their sustainability goals, but are able to save money,” Smith said. “They can also [profit] from the additional value of integrating solar into the curriculum and enhance their visibility in the public arena as leaders.”

Secure Futures also participates in educational workshops. The company on Monday partnered in a workshop for teachers at Albemarle public schools. Collaborating with Secure Futures was National Energy Education Development (NEED), a nonprofit organization based in Manassas, Virginia, that provides energy education to over 65,000 classrooms nationwide through kits and materials.

“It’s really to move solar from the rooftop to the classroom,” Smith said of the workshop.

Amory Fischer, the business coordinator for Secure Futures, explained how the workshops not only contribute to school curricula but also help the solar-power business.

“The goal [of the workshops] is to provide access to the teachers on how to use those tools in the classroom, and also to be able to provide an opportunity for the students to be able to learn about a growing industry,” Fischer said.

Adding to the school curriculum can be done without distracting classes from year-end Standards of Learning (SOL) tests, he added. “They can use the time for creative learning and also reach the standards that they’re supposed to meet under the SOLs.”

NEED also provides kits and materials for classes that are geared toward the Standards of Learning  tests students take at the end of each school year.

Aside from increasing students’ understanding of class topics, Secure Future’s Smith said he thinks it is important for students to become active leaders in their communities and in the careers they choose.

“To understand the relationship between sun that we enjoy for many other purposes and how it can be harnessed in a very beneficial way to reduce our carbon footprint becomes a great learning opportunity,” he said.

Six Albemarle County public schools have also worked with Secure Futures to install panels on their roofs. Teachers from each of those schools attended Monday’s workshop.

Teachers from Lylburn Downing will attend a similar workshop in the fall.

Fischer said solar energy conversations were started in Albemarle schools by students. In 2013, a group of students and community members organized a presentation for the school board about solar power.

“My sister was in eighth grade, and she walked a solar robot across the desk at the Board of Supervisors meeting to show that solar worked,” Fischer said. “They were very impressed by that, so that was fun.”

The Albemarle public school system then issued a request for bids on the panel installation project, and Secure Futures won the contract.

“Anytime we have kids going into the community and talking about what they’ve learned, or people going by the schools and seeing the giant panels beautifully across the roofs, the community grows an appreciation for solar energy,” he said.

Ricky Vrhovac, principal of Sutherland Middle School in Albemarle, said the biggest benefit he sees is the students’ recognition that humans are contributing to climate change, and that they can do something about it.

“By us doing absolutely 100 percent nothing, we’re generating electricity that can be used in our community or somewhere along the grid to reduce the number of houses that rely on fossil fuels,” he said.

The benefits of solar energy are reflected in the Lexington area’s  private sector as well. Like the students and staff at Lylburn Downing, two Lexington residents are learning just how useful solar energy can be.

Carroll Comstock and Betty Besal installed solar panels on their roofs last April. Since then, both have seen a hefty reduction in their monthly electric bill, from over $70 to around $8.50.

Financial benefits aside, Comstock said he likes the idea of reducing his negative impact on the planet. “I like the warm and fuzzy feeling that your carbon footprint is not as big as it used to be,” he said. 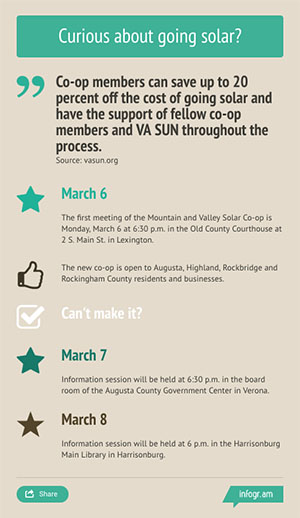 Besal said she has always been interested in humans’ dependence on energy. Her house was built two years ago with the primary purpose of minimizing energy usage.

“Yeah, I’m pretty much a nerd about that. Especially the first year, I was curious about how much sun is used to make heat and cook food,” she said. “I just love it.”

Lexington’s Superintendent of Schools Scott Jefferies said he thinks there might be more interest in solar technology as a line of work now that students are studying it earlier.

“There’s a lot of high-tech jobs, specifically here in the commonwealth of Virginia, that are sitting vacant because we don’t have the work force to fill them,” Jefferies said. “If we can somehow, in some way, be a small part in producing future workforce workers, that would be very exciting.”

Later this year, Secure Futures is expected to install picnic tables with tent-like roofs covered with solar panels at Lylburn Downing and Albemarle schools, allowing anyone to charge a computer or phone directly from the panels.  It’s another way of strengthening the students’ and communities’ connection to the uses of solar power, Munsey said.

“Any chance that they have to be able to interact with this technology and learn about green, reliable energy – ” he said, “it just doesn’t get any better than that.”

Thank you for following along with

“Washington and Lee University students will not

Despite being separated from students in classes t

“Here at Washington and Lee, the school’s Secr

NEW STORIES LIVE NOW: Visit our website to get the

Reporter Isaac Thompson talks about his most recen

Flip through to hear our reporters talk about thei